Prequel to Lovely Strings!
Exerpt from Threads of Regret 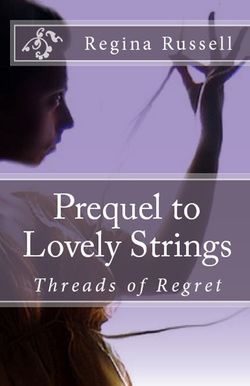 To purchase a physical copy of this sixty page book, you can order it here:
https://www.createspace.com/4184544

All rights reserved.  No part of this book may be reproduced in any form or by any electronic or mechanical means, or the facilitation thereof, including information storage and retrieval systems, without permission in writing from the author, except by a reviewer, who may quote brief passages in a review, the work for classroom use, or publishers who would like to obtain permission to include the work in an anthology, should send their inquiries to: Regina Russell, 10745 E. Laurel Rd., London, KY 40741.

This book is a work of fiction.  Names, characters, places and actions are either the product of the author’s imagination or are used fictitiously and any resemblance to anyone living or dead, businesses, events or location is entirely coincidental.

Her heart was pounding as if she were the one getting ready to walk into the small establishment with a gun tucked underneath her belt. She brushed her hair out of her eyes so she could see into the store more clearly.

She hadn't had a hit in two days and there was nothing she wanted more. But they were close now. She could feel it.

She watched as Charlie sauntered toward the door and then stopped to lean against the building. He attempted a casual pose while keeping his head down. She sighed. To her, he looked as awkward as one of the skinny-legged cranes she saw frequently picking their way along the shallows at the lake. She was still watching a moment later, when a customer came out carrying a newspaper and a gallon of milk and walked right by him. She saw Charlie slip inside the store without even touching the door before it closed all the way.

When she reached thirty Mississippi, she smiled anxiously to herself, started the car and put it into reverse as she began to back out.

The blast of a horn blowing startled her causing her to stomp on the brakes. The momentum jerked her forward in her seat. She looked to her left. The man she saw carrying the milk out of the store had brought his car to a quick stop also just a few feet away from her bumper and he was glaring at her. She put the car back in drive and shot her hand out of the window giving the man an obscene gesture while she pulled the car back up to let him by.

She looked around her and took a deep breath. Charlie was still in the store. She tried backing up again. This time she navigated the car out of the parking spot successfully and then began her slow drive toward the front of the store as she watched for Charlie to come back out.

What was taking him so long? Suddenly, she saw him bolting across the parking lot towards her. Instead of driving up to meet him, she stepped on the brakes again.

"Go! Go!" he shouted as he jerked the passenger door open and this time she did step on the gas and the car lurched forward.

Charlie barely made it into the seat.

"Did you get the money?" she asked him, the urgency in her voice matching the wild look on his face.

"Lovely Strings was a beautiful, powerful, and soul -stirring book. The writer effortlessly weaves together the lives of seven women, creating a powerful web of deceit, lies, and misdeeds. But, also included is the stunning power of love and redemption. This is a very complex, multi-layered story, but the individual stories come together beautifully."       WRB on Amazon